The Chymical Wedding of Christian Rosenkreutz

April 11, 2018
"The following is a pictorial key to the spiritual journey. It is archetypical, that is, these images/energies are present in each one of us, and the journey is also the same for each one us. Look carefully, feel, and see if it resonates with you.
The images are drawings from Johfra Bosschart, a Dutch modern artist (1919-1998). Johfra is a rather unknown painter. Nevertheless his works are magnificent. The drawings on this page appeared as illustrations in The Chymical Wedding of Christian Rosenkreutz, published by Lectorium Rosicrucianum, a Rosicrucian order founded by Jan van Rijckenborgh in Belgium (now an international order).
The images give a quick overview of the spiritual journey. If you desire to know more, read the The Chymical Wedding of Christian Rosenkreutz. This anonymous text appeared in 1616 in Strasbourg, Germany as the third pamphlet of an order called Fraternity of the Rose Cross. Nothing is known about the author or about the order itself. Thus the text stands by itself. All subsequent Rosicrucian orders that have appeared, have claimed to be linked with this Fraternity of the Rose Cross. They all have developed their own philosophies, sometimes contradictory to each other. If you are looking to connect with one, explore the Lectorium Rosicrucianum. I am not associated with them, but I like their Gnostic approach. They do not claim a link to the Fraternity of the Rose Cross, nor do they have a spiritual master dictating them doctrines. They teach a path of transfiguration to lead humans back to their divine origin.
If you want to read the text of The Chymical Wedding of Christian Rosenkreutz, there is a PDF file you can download at the www.Hermetics.org website.
The Evening before Easter: 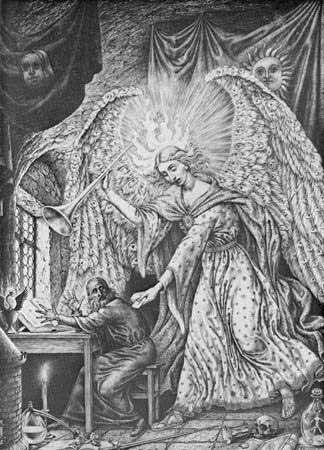 Here is the student at the beginning of the alchemical Great Work (the retorts on the floor). The skull points to the death of the old that he has to let go, and to the transformation that is going to take place. The phoenix on the table represents the result of the transformation. The candle light under the table is the divine light hidden in oneself. It is always burning, whether one is aware of it or not. The student was reading books. That is usually how it starts. He yearns for knowledge. An angel visits with a message, an invitation. This is the spiritual call. This can happen in different ways: a vision, an life changing accident, etc. One feels called to follow the spiritual path. The wings of the angel are made from peacock feathers, again an alchemical symbol, that stands for Cauda Pavonis, the Peacock's Tail, when the Light in the student starts to appear.
The Rescuing Cord: 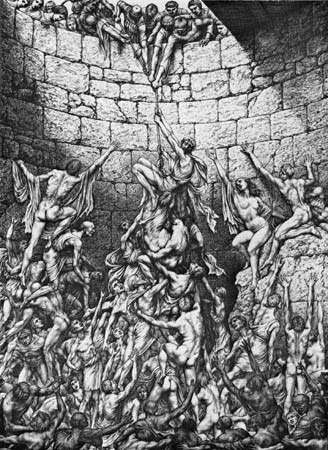 After becoming spiritually aware, the student feels himself trapped in the material world, where so many people, although unaware, want to be rescued from the perils of life. But it is also a struggle within oneself, to deal with all the emotional and mental inner conflicts, and the desire to get liberated from all that. The spiritual world does reach down (the cord) to help those who truly want to work on themselves.
The Travel Penny of Christian Rosenkreutz (CRC): 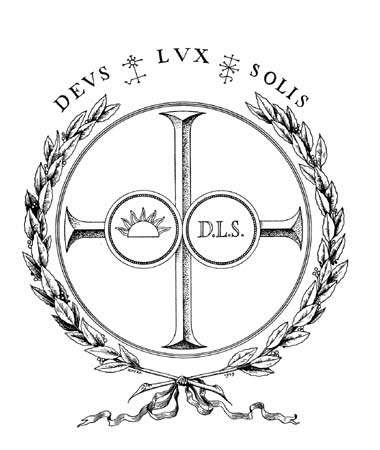 CRC is given a travel penny. It is like a seal that shows the intentions of the spiritual seeker, but also grants you safe passage in the spiritual realms. The three words Deus, Lux, Solis mean the Divine, Light, Sun. Thus he travels now in the Divine Light of the Sun.
The Beginning of the Journey: 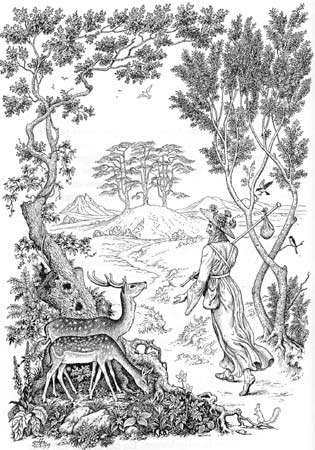 CRC has to choose which of the four paths to follow, but the signs also say that the path one has to follow is destined. When one incarnates he has chosen a particular path to follow. Although other spiritual paths (practices) also lead to the ultimate goal, one needs to feel which path is his to follow. When he chases a pigeon and a rave (both alchemical symbols) he finds himself unintentionally one of the paths. Thus the spiritual seeker must let himself be guided by his intuition and automatic responses.
The Three Temples: 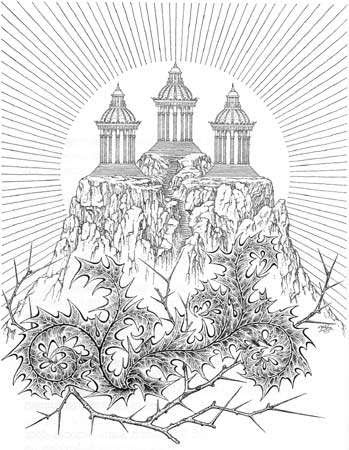 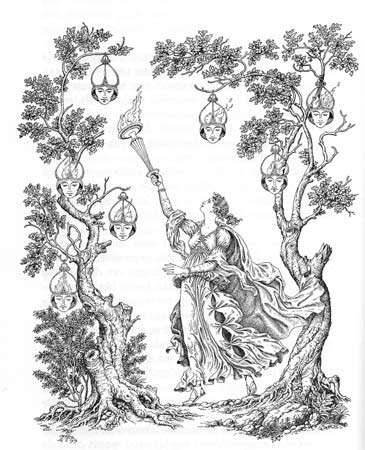 CRC has a dream:
"He who will raise himself will be humiliated." 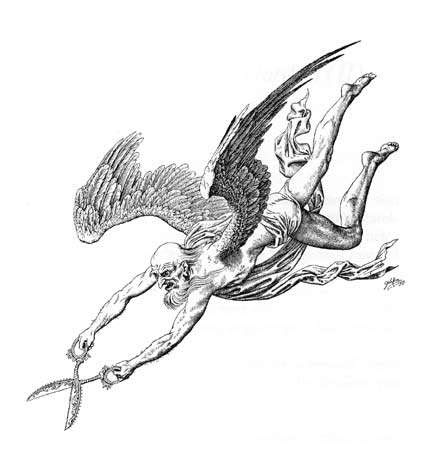 On the spiritual path one must be humble. There is no place for the manifestation of egoistic desires. The image is that of Saturn cutting the life cord of those whose life is ruled by the ego.
"So, Brother Rosenkreutz, you are also here?" 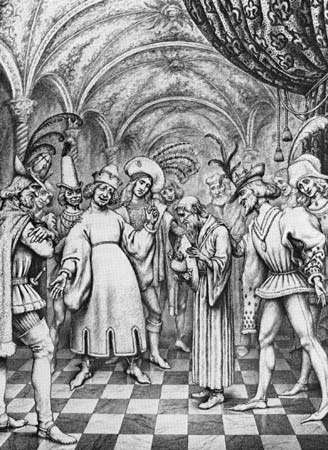 CRC is in an assembly room with others who are spiritually called, but who haven't let go of their egoistic tendencies. They look down on CRC in his simple clothing. Thus the humble spiritual seeker will find himself in situations where people, who proclaim themselves to be spiritually advanced (the New Age field is full of those "authorities"), will look down and scorn the true pilgrim.
The Announcement of the Verdict: 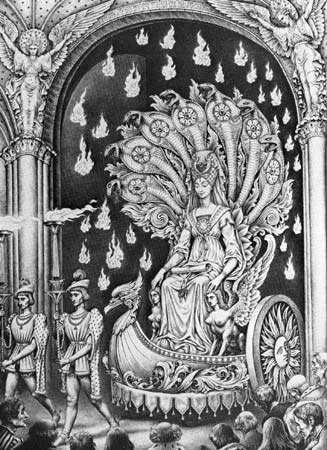 Note that the divine lady has seven cobras around her, a clear reference to Kundalini and the seven chakras. She also has a sun jewel at the heart level. She warns the company that those who forced their way in here in order to gain profit for themselves, will be severely punished in the judgment that will follow. Of course, CRC passes.
The Three Royal Couples: 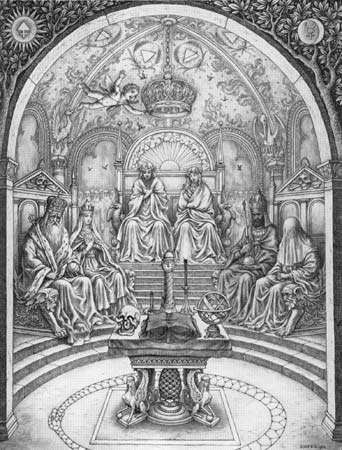 After having ascended a spiral staircase CRC arrives at the Bridal Room: there are three thrones with three royal couples: young, middle aged and old. A lot of symbolism here. First the three stages of life. The spiral staircase can refer to the spinal column and the ascent of the kundalini. Note the Ouroboros serpent on the floor. When the kundalini leaves the spinal cord it arrives at the pineal gland/ ajna chalra where opposite energies of ida and pingala are unified: thus the symbolism of the Wedding. The crown at the ceiling refers to the Crown of the Great Work.
The Play in the Sun House: the Lion and the Griffon: 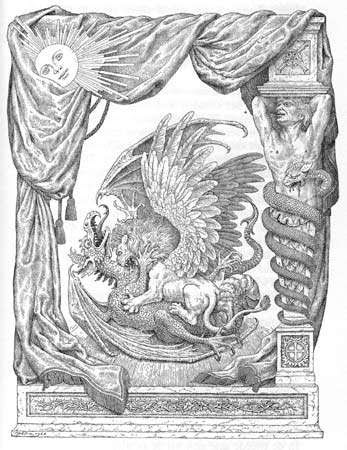 The Griffon is the symbol for primal energies, the lion of royal energies. The lion wins. Note that the lion has wings, meaning that the animal nature has been refined and spiritualized.
The Play in the Sun House: The Image of Nebucadnezar: 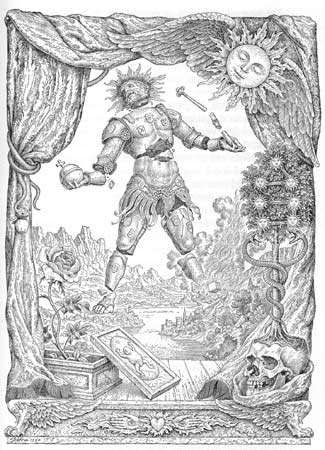 Many symbols in this drawing. In the text the statue of Nebucadnezar is only shown. Johfra here depicts him as falling apart. Jofhra points to the crumbling of the old self, the death of the ego. The skull is transformation, the tree is the process of transformation. The two serpents around the tree points to the kundalini rising up in the spine (ida and pingala joined). the suns in the leaves of the tree refer to the Cabalistic Tree of life.
The Seven Ships at the Lake: 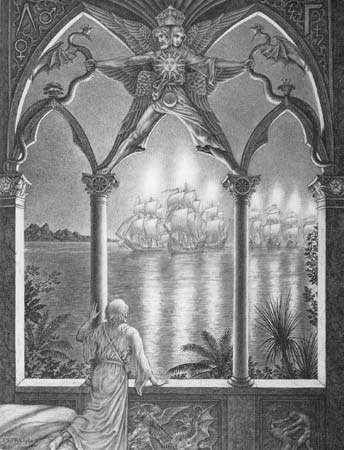 In the arches; the hermaphrodite: the opposites, male and female, yin and yang, ida and pingala, have been joined. The spiritual seeker is not polarized in male or female anymore; he is truly androgyn. The seven ships carry away the decapitated bodies of the three royal couples. Again symbols of the transformation that took place. The seven ships can also been seen as the seven chakras that went through the transformation process.
The Offering of the Pearl: 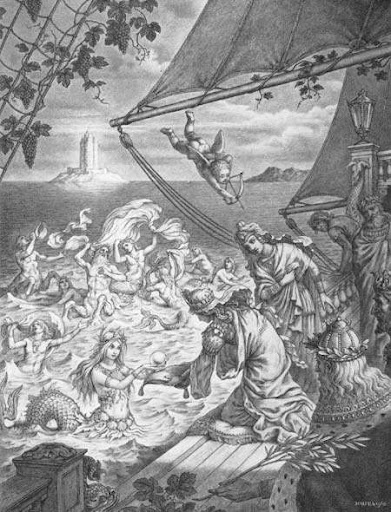 A mermaid offers a pearl as a gift for the Wedding. The pearl is the symbol for the Divine Self. The spiritual seeker is coming in contact with his Divine Self, that precious, round brilliant jewel in each of us.
CRC on the Tower of Olympus: 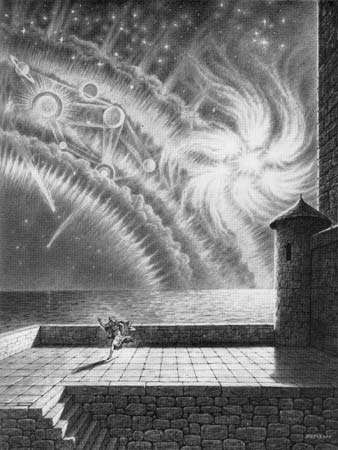 Olympus is the mountain where the Greek gods resided. CRC is on the top of the tower, that is, he is at the level of the crown chakra. Here he witnesses seven Flames descend on the top of the tower, after which the winds makes the sea wild and clouds cover the moon. He gets afraid and rushes back into the Tower (=the body). In Cabala it is said that at the Crown (the top Sephira of the Tree of Life), the divine is witnessed as a Maelstrom, what can be a terrific sight.
Resurrection: 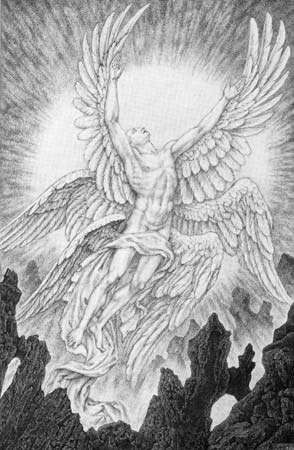 self explanatory
The Fall of Babylon: 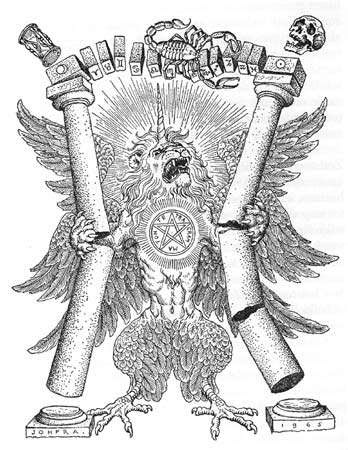 The old world ceases to exist."